I recognized that RSS on bootstrap_blog_skin does not work. (On bricks_skin is works) - So I think this is a matter of boostrap_blog_skin.
Used Browser: Firefox 68.0.1 (64-Bit)
Here is a screenshot:

Given that you have just edited a file and done other things to that skin (copy and delete a folder), change the name of the skin so it can't be used and import a fresh bootstrap_blog_skin to see if the problem still exists.

How do invoke the rss, is it automatic or can you provide the url where you clicked on link?

I don't know how you got to that page with error.

The error looks simple in that the page should not have spaces at the beginning.

If it works then copy the file before as in the previous topic but do not edit it and see if it works.

Then edit carefully and see what happens

I call the rss through the rss widget. This is the link:
https://www.npo-consulting.net/blogs/notepad.php?tempskin=_rss2&disp=comments
rss is activated (standard)

The skin has been upgraded by the last upgrade of b2e to 6.11.2 - I have only touched the custom.css.
Where do I find tempskin?

I've never used rss and have had it disabaled so it's a bit of a new idea to look at.

What I mean by skin is before the tempskin is invoked by the rss
a) there is the current skin, which is what I ask you to replace due to changes in it
b) where in the current skin do you invoke the rss is it as in the image below

If it is then you can see my query as it is the same 'page' that has the 'Preview' button code hidden.
I want to ensure there was noting in the changes that could have caused this.

Also the URL to the problem isn't really much good without the previous page, which I think is any post on that site where the rss icon sits. So when asking for screen shots it's really important to get the one that is used where the problem arises not just the resulting error.

Can go back to the original version of the bootstrap_blog_skin before the edit I encouraged, by replacing the whole folder?

Ignore the following for now

I have noticed that the bootstrap skin uses the rss2 temporary skin
I would like to know which brick skin you are using and what rss skin it calls on as
a) it may use the rss skin in which case there could be an issue with the rss2 skin but
b) if it uses the same 'rss2' skin then the problem is with the skin, hence rollback the changes to the skin to gather info on if the changes made for the 'preview' button did this.

So you can see the need for a full screen shot of the browser page of where the problem starts, including the url as well as the full browser page which shows the error.

@amoun hmm; try to figure out why the actual bootstrap_blog_skin does not serve rss properly while other skins (e.g. https://fokus.genba.org/?tempskin=_rss2 do a great job) - The problem with rss in bootstrap_blog_skin is an old one. I have had the problems since years, so that bug has nothing to do with your working fix of the preview challenge ;-)

Ok; I deleted the bootstrap_blog_skin, uploaded the skin from the an actual download of 6.11.2 and reinstallted the skin. No change.

What I realized is, that calling an RSS Feed from the widget the URL is different from calling it out of the post for subscribing comments to a special page

This is the URL called by the rss widget:
https://www.npo-consulting.net/blogs/lector.php?tempskin=_atom&disp=comments

This is the URL called by the a pages RSS Llink for comments of that page
https://www.npo-consulting.net/blogs/skins/bootstrap_blog_skin/?disp=comments&p=451

In the first case the rss is called under collection by ?tempskin and in the second one by the skin itself. - Both don't work

Thanks for replacing the skin as a test.

I can't test your attempts to use the rss feed without the actual links/buttons you use, hence the requests for the url where you try the actions that result in the URL's you post.

Only by starting where you start can I inspect the code that provides the links whether on the page or via the widget.

But neither of the above URL's you show would work. So where is the link (URL) to page that shows these options? not the links(URLs) the page/widget provide :) You know . . . Monsieur Planque's oft request for 'Proper' screen shots, not clips of the problems

Before I post some screenshots I want to point out, that this bug probably is not related to a certain skin. I loaded another skin and the bug remained.
What is also showy: The widget of this installation (also 6.11.2) differs from the widget of another installation, because is does not show an option to subscribe an RSS Feed, only _atom and _rdf

So here are the screenshots
1) Customizing

PS: Is there a way to set div class="clearfix" for better organizing thumbnails?

A screenshot of whole browser image including the URL, that is was is asked for and directions on how to emulate what you did. Then I can look at the code. :)

So starting with one skin and one installation the idea is to see what you are doing on the page with URL so I can try, and also check the code. It seems there are two ways to invoke the rss 1) by the link on the post and b) by a widget.

I'm only interested in getting the one on the page working first, if that's ok with you. So I don't want any more info on the widget.

@amoun sorry I miss the point. In this thread I noticed all URLs I got when calling a rss feed url. Also in the last post in one screenshot you'll find the URL that leads to an error warning of not having a permission to access the server and so on.

You can test it yourself if you call e.g https://www.npo-consulting.net/blogs/notepad.php/the-new-klondike-intoxication-nuggets-in-silicon-valley or any other page.

May be the bug is related to the Stub, because the collections root is something like "notepad.php/" or "pad.php/"

I tried to debug the problem. But there is no debug report only warning pages that it does not work.
So what else URL do you mean ? I have no idea, but as mentioned, may be I miss the point.

Also in the last post in one screenshot you'll find the URL that leads to an error warning of not having a permission to access the server and so on.

You can test it yourself if you call e.g https://www.npo-consulting.net/blogs/notepad.php/the-new-klondike-intoxication-nuggets-in-silicon-valley or any other page.

I had tried that link before and got the warning about XML so something has changed.

I am trying to add rss to my site and test it there as I am using 6.11.2
I'll then try different skins and reply.

Ok have applied rss to my site and will deal with my errors on a separate topic, one at a time that will relate to the various errors you have.

after Upgrading to 6.11.3 RSS Widget does work again. But nevertheless the RSS Comment Feed in Posts fails.
The screenshot shows, that the bug roots in a false URL. For the working URL I used ?tempskin=_rss2&disp=comments&p=517 taken from another installation where RSS Comment Feed works.
@fplanque is there a fix or should the work around @amoun suggested should be used? 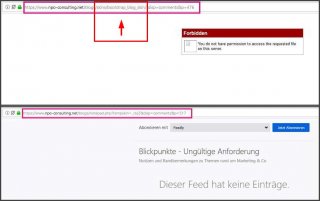 May it be, that this bug depends on another one: In the xml widget there is no rss link, but only atom and rdf (And I can not figure out where to customize this) following a screenshot

PS: Is there a way to add <div class="clearfix"></div> to a comments field, for ordering the images in the post?

And another finding: I tried to find out what is meant by "You do not have permission to access the requested file on this server." It referred to Directory Indexing.
So I activated "Directory Indexing" and got this result: 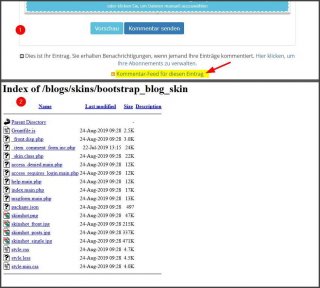 Hope this helps to find and fix the bug

@saunders Hello, we investigated your problem and could reproduce when feed skin rss2 is not installed in system because here https://github.com/b2evolution/b2evolution/blob/develop/skins_fallback_v6/_item_feedback.inc.php#L558:

we call a feed skin by folder name _rss2.

We fixed code to fallback the requested skin like _rss2 to first found installed feed skin in system. I think on your site the link will be fallback to_atom` skin after update code.
Commit https://github.com/b2evolution/b2evolution/commit/a4dceb70abab1113f66fa7bd9cf97ca21a7becd1.

What I've realized by your post was, that the rights for both folders - rss and rss2 - had been set to 0750 (_atom 0755) So I changed this to 0755 like it is for the _atom folder. But nevertheless the feed falls back to _atom. Probably because of cache (?). So I will try it later again.

But how do I customize the XML Feeds Widget which in my case only shows _atom and _rdf but no _rss2 feed?

I am glad, that almost _atom feed works when calling a comment feed of a blog post. So great work. Thank for that!

PS: Is there a way to add <div class="clearfix"></div> to a comments field, for ordering the images in the post?